One Oak Poll Merino sold to a record auction price Friday on-farm at Jerilderie, with their top ram selling to $28,000 and the second top price ram selling for $18,000.

This most wanted stud sire was described as an all ’rounder with a balance of quality and volume in wool and meat. His wool measured 19.1 micron with a standard deviation of 3.3 and a coefficient of variation of Fibre Diameter of 17.3. The ram was DNA tested and is by Red-31, out of a special stud medium wool ewe. Stud principal Alistair Wells said that R19137 had a balance of meat and wool that will breed on and exhibited a level of comfort factor that reflected the stud’s ambitions. This ram is plain bodied with increased body weight and long staple wool, Mr Wells said.

This younger ram was described as presenting with deeply crimped elite wool through to his points and underline. Carcase-wise he was square, solid and had the potential to easily fatten. His micron was 18.9 with a standard deviation of 2.9 and a CV of 15.3,

The other ram sold at that price was lot 20, B20118 produced by artificial insemination with 18.6 micron wool and 3.5 Standard deviation.

Mr Wells said embryo transfer had served One Oak Poll very well, and was worth the expense. “Artifical insemination is cheaper upfront but less effective. With ET the genetics of both sides are dominant.”

Mr Wells said he and his wife Natasha and their children Amelia and Lachlan were thrilled with the result of the sale.

The sale was settled by Elders Jerilderie.

LIFTING WOOL CUT: Andrew Browning has been using One Oak Poll genetics for many years and has been working on wool cut for many years, with the adult ewes cutting 8.2kg.

ANDREW and Catherine Browning are making the most of the country they have by lifting wool cuts and improving lambing percentages.

The mixed farmers run 1850 Merino ewes alongside a cropping program at Ivyholme, between Jerilderie and Coleambally.

The Brownings have had Merinos for more than 40 years, with Mr Browning being the second generation on the property, and the typical Riverina Merino suits their operation.

“With the surge in sheep prices we’ve been trying to focus on the maternal side, as well as more opportunities with the meat market.”

The Brownings have used genetics from the Wells family’s One Oak Poll stud which was established by Catherine’s father Graham and her grandfather Alby, since 2014.

“My family was with the original One Oak stud, one of Graham’s main bloodlines, from the mid-1980s,” Mr Browning said.

“When Graham dispersed the One Oak stud in 2014, we moved to the One Oak Poll stud run by Catherine’s brother Alistair and his wife Natasha.

“They’ve always had good wools, and I’ve always been focused on trying to produce the best wool sheep that I can.”

Wool cut has been a big focus over the past few years.

“I’ve been working on lifting wool cut since I’ve been running sheep, because it’s not a huge property (1680 hectares), so they need to be efficient. We do run at a higher stocking rate than some of the larger properties in the area, but we’re making the most of the country we have, supplemented by areas of improved pasture and irrigation.” 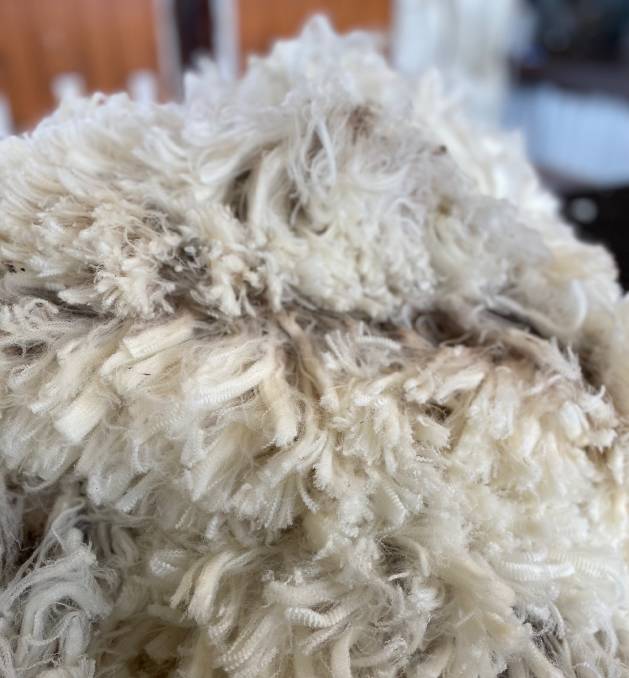 QUALITY WOOL: The Browning family’s Merino ewes are cutting around 8kg of wool, at 20.5- to 21-micron for a 12-month shearing.

He has considered moving to a shorter period between shearing, but it’d have to fit in with the cropping program, he said.

“At the moment it’s a 12-month shearing. I think six months shearing could be risky here in the tight seasons, in terms of making the required staple length, and I’ve looked at an eight-month shearing but it’s hard to fit in with the cropping program.”

Mr Browning is looking to lift lambing percentages, with the goal to have more surplus ewes for sale each year, along with the wether lambs.

“That’s something I’m working on with the poll rams, looking for the increase in fertility, combined with improving our management to increase lamb survival, to lift lamb numbers.

“We started scanning three years ago for singles, multiples and empties to try to modify management to maximise the feed opportunity for the multiples.”

The Brownings have also trialled supplementary feeding of the ewes prior to lambing.

“We’ve recently been playing around with feeding lupins to ewes in the month leading up to lambing, but our general approach is to try to have the ewes in at least good store condition prior to lambing, and on a rising plane of nutrition,” Mr Browning said.

“We run the sheep on a mix of native country with some run on irrigated crops and pastures, and we drench the ewes on to the stubbles over the summer which gives the native country a break and it’s good for a worm break as well.”

We do run at a higher stocking rate than some of the larger properties in the area, but we’re making the most of the country we have, supplemented by areas of improved pasture and irrigation. – Andrew Browning

He grows winter crops, including wheat, barley and faba beans, as well as canola for seed production, which is grown under a mix of flood and overhead irrigation.

“We do have a small portion of the wheat area that’s sown to grazing varieties and usually the weaner ewes will go on there to grow out.”

Wethers are sold through the November store sale at Jerilderie, at five to six months.

“They’re weaned onto irrigated pasture at the end of August and we try to get them as heavy as we can, usually 45kg to 50kg,” Mr Browning said.

“The improvement in bodyweight provided by the polls is highly noticeable.”

Classed out young ewes are sold at the John Wells Mermorial store sheep sale in Jerilderie in October.

“Our numbers have stayed static for a while, but we never have enough classed out ewes to sell, which is why we’d like to lift production without increasing numbers. I’ve historically run the place on my own with help at peak times throughout the year, so I try to have a streamlined operation, running sheep  as efficiently as possible, because the cropping takes up a fair bit of time.

The three placegetting flocks were each classed by him, and, the flock which was awarded the most profitable.

Eleven-months wool certainly impressed when the tour arrived at Barry and Vickie Carruthers and son, Jared, Milbank, Tullibigeal, but it was also the conformation, quality and wool cut of the 20.5 micron average One Oak Poll blood flock of some 40 years that really impressed as standouts to win the competition.

The Carruthers won this competition in 2019.

One Oak Poll ram, 18010 sold privately for $30,000 on the day the studs 2020 on-property auction. The sire was purchased by Justin Boughen from Kamora-Netley Park, SA. Justin said he admired the big soft muzzle and the style of the long stapled fleece. “We came to buy a ram with white and pure wool”, he said. “Our ram has terrific lock structure and a very dense fleece.”

NO newcomers to Merino maiden ewe competitions, Justin and Natalie McCarten have made the 2020 Lake Cargelligo fixture their third win in 20 years.

Mr McCarten, said a judge, several years ago, Matthew Coddington, Roseville Park stud, Dubbo, had commented that his ewes had the full genetic potential to grow out into good matrons and gain the benefit years on of breeding better sheep.

“I’ve followed his comments and put the effort into turning my ewes into well nourished and well-grown sheep,” Mr McCarten said.

“I do have better breeding ewes and they have big frames and cut well.”

The maidens now at 20 months had been joined for six weeks and would be scanned in another four weeks with Mr McCarten still deciding whether to join the empties back to Merinos or to White Suffolk rams.

“Having all one flock of Merinos makes for easier management and Merino lambs may not turn-off as quick as crossbreds, but I benefit from the extra wool as well at 7.08 kilograms,” he said. The Glen-Echo flock won the top award in 2010 and in 2018, and has been runner-up four times and placed third twice.

“They’re good rangy types with plenty of neck extension, fair bit of leg under them, good spine and penty underneath,” he said.

“Their muzzle type suggests they are a good constitution type of sheep.”

Introductory judge, Henry Armstrong, Pemcaw stud, Dunedoo, agreed saying the ewes are impressive and all pretty even in type.

“All have good heads and not many are overdone.”

Impressed with the ewes’ feet, he said they were excellent. “With feet I look for both claws the same shape. If you get the feet right you don’t have too many problems.”

Yuruga Plains produces fine Merino yarns, direct from their farm to the customer

Rachel Canfield loves knitting and crocheting and wanted to spin the wool grown on her parent’s property, Yuruga Plains, into yarn for her own use. But once spun, the wool was too good to keep just for herself and so Rachel decided she was going to share this product with others. After seeking out the few remaining local businesses that would process the families raw wool into yarn, Rachel was able to create an entirely local product that is made from start to finish, in Victoria. Yuruga Plains yarns can be purchased online at www.yurugaplains.com.au. The story of Yuruga Plains fine merino wool has been generations in the making. The Canfield’s, have been producing fine merino wool in the Loddon Valley region in Victoria for more than 80 years. Rachel’s parents, Geoff and Carol Canfield are long term One Oak Poll clients.

The 24th annual Lale Cargelligo Maiden Merino Ewe Compettion was held on Friday February 1st, 2019, with eight competitors from Naradhan, Rankin Springs, Weethalle, Gubbata, Kikioira, Ungarie and Tullibigeal localities. First place was awarded to the Carruthers family of “Millbank” Tullibigeal who presented a flock of 20 micron One Oak Poll Merino ewes which the judges regarded as being very bloomy and high crimping wool with large framed sheep with a good butt shape for easy lambing and fertility. The Carruthers family achieve 91pc lambing and average 8.5 kg of wool per sheep. Their yield is 58pc and the ewes had 10 months wool growth. The ewes were classed by Michael Elmes, who culls 34.3pc of young ewe lambs to give an averaged gross margin of $247 per ewe.

Third place went to Justin and Natalie McCarten of “Glen Echo” Rankin Springs who presented a flock of 20 micron One Oak Poll blood ewes. The judges thought the wool displayed cut and handling in droughty, dusty conditions. The body shape was very good with a good finish of wool all over each ewe. These ewes have lambing percentages of 112pc which enables a culling rate of 32pc. Justin and Natalie cut 5.8 kgs of wool after 10 months, taking advantage of the good wool length their ewes grow to shear at less than 12 month intervals. The ewes yielded 59pc and gave an averaged gross margin of $261 per ewe. They were classed by Michael Elmes.